As we ready ourselves for the start of the hockey season, we'll take a look at the Wings on offense, defense, special teams, and the coaching.

Defense wins championships, but offense puts the butts in the seats. That's the cliche, right? Sure, let's put some butts in seats right now and take a look at the Red Wings offense this year.

Last season, the Red Wings scored 217 total goals, good for 16th in the league between Winnipeg and the Islanders. The 2.65 goals per game rate is their 2nd-lowest since the Wings last led the league with 3.52 goals/game in the 2008-09 season (their lowest was in 2012-13 at 2.54 goals/game). Equally as troublesome has been the steady decline in shots created per game down from a high of 36.2 to just 30.0 last season.

Granted, last season's injury problems were worse than any of those previous years as well. With the roster gutted, head coach Mike Babcock had to play a more conservative style, which hurt the team's offensive numbers, but helped them earn a playoff spot.

Either way, we'd like to see Detroit climb into the top teams in the league offensively.

Gone from the current lineup are 35 goals provided by players who don't have Red Wings contracts anymore. The biggest chunk of those was Daniel Alfredsson's 18 and it's not out of the question that he could be back. Second to Alfredsson in scoring was Todd Bertuzzi, whose 9 goals will have to be replaced from elsewhere. The next biggest loss is David Legwand at 4. Offensively, the team isn't going to miss Patrick Eaves, Mikael Samuelsson, or Adam Almquist.

As far as additions, the Wings weren't really in the market for scoring aside from the assumptive boost that a better top-four defenseman/PP quarterback could bring. That didn't happen. What Ken Holland ended up bringing in among those who weren't just re-signings are Kevin Porter and Andy Miele, two players expected to bolster the Griffins this season.

Throwing out all six empty-netters this season, the Wings scored 159 of their 211 goals at even strength (13th in the league), 49 on the powerplay (T-11th), and 3 shorthanded (2nd-worst in the league). They'll need to improve in just about every area overall here. The shorthanded scoring being awful is annoying because I personally feel that a more-dangerous PK can help slow down other teams' power plays, but even the most SH-goal-reliant team last year (CGY) got barely more than 6% of their total goal output via shorties. In that case, it's more a case of shorthanded goals being a defensive consideration.

By position, the Wings got 26 of their 217 goals by defensemen. For comparison, Gustav Nyquist outscored the entire blue line for the Red Wings by two goals last season. According to Quanthockey.com, the average breakdown was 83.7% of offense coming from the forwards. Detroit put up 88%. Combined with the overall disappointing scoring figures, it's evidence that the defense needs to score more, but it's not like we don't want the forwards to provide more either.

For what it's worth, if the Wings scored exactly as many goals from forwards, but met the league average for percentage breakdown, they would have ended the season with 11 more goals from defensemen. This difference would have put them only at 11th in the league, but the general thought among the stats community that three goals roughly equals one point in the standings. Three additional standings points would have prevented the Boston matchup in the first round at least.

For looking at where the shots and goals are coming from, we'll turn to two great sites for tracking these things. The first is Sportingcharts.com, which has maps out for shots and goals for all teams and players in the NHL, along with a great comparison tool. Here's where the goals came from for the Wings last season. 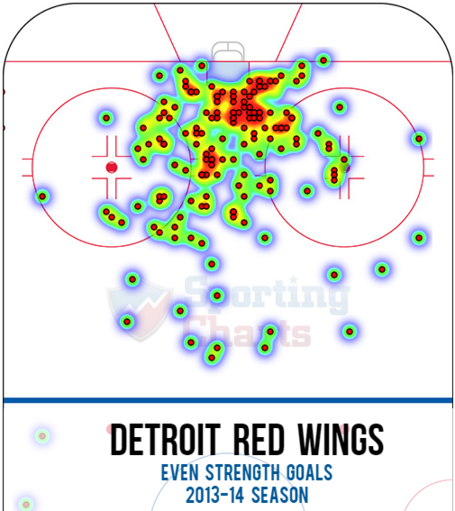 There's plenty more info at Sportingcharts.com, including average shot distance and a breakdown of the types of shots which went in.

This chart shows only the even-strength goals and shows pretty well why people are paying so much attention to the "Home Plate" area which extends diagonally from the corners of the net up to each faceoff dot and then straight up to the top of each circle as the high border of the zone. One thing you'll notice here is how the net-front heat lies closer to the goalie's left side. This is something we should probably expect to see again for the Wings, as they are still a very left-shooting-heavy team. If you check out the maps for more right-scoring heavy teams like Anaheim or Winnipeg, you'll see a slight lean on those teams' heat maps to the opposite side of the crease.

Goals just show results without telling us much about shot creation. For that, we'll move over to War-on-Ice.com, which has a hextally for shot location among the bevy of options for looking into stats. Here's what it looked like for the Wings in shooting. 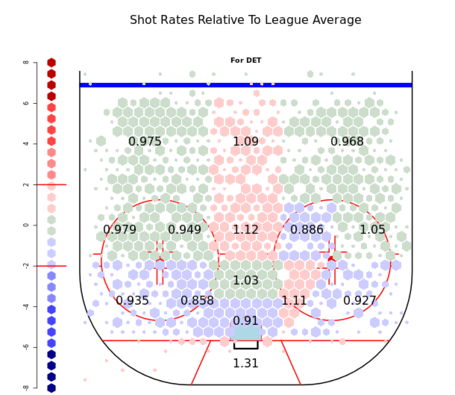 What we see here runs a bit counter to the previous chart, but I think that's actually a bit by design. See the green areas are places where the Wings essentially shoot at rates very similar to the league average. Redder areas show places where the Wings shoot more than normal while the blue spots are the cold zones for shot rates. The Wings are better than average at getting into the high slot and the middle of the top of the zone, but overall they don't get as many shots off from low angles, except for the interior left-wing side.

If you throw out Daniel Alfredsson's right-shootingness from last season, it makes sense that the Wings would end up with colder shooting rates from the low side where left-handed shots can see more net while they get slightly more off from the opposite side. Essentially, the Wings' natural tendencies to cycle to that side and the defenses' natural tendencies to cut off those more dangerous lanes made it harder for the Wings to get shots off. The low red spot looks like it shows more cases where lefties were cutting across the middle and were denied a chance to get the puck off until they had crossed out of the slot or where they got to rebounds in shooting position.

If we look at the shooting success percentage mapped out in the same place, we can see why the Wings got fewer shots off and why defenders would want to ensure that. 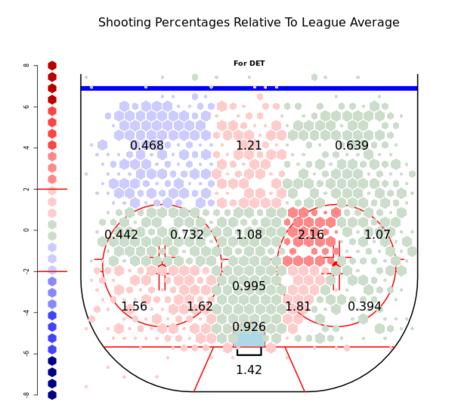 You can see that in the low areas where the Wings had more difficulty getting shots off, they were more-dangerous in those areas to the left side of the net and just across the slot on the goalie's right. Low right shows a much worse than average shooting percentage, which also seems to fit well with the left-heavy makeup of the team.

On another note here, the Wings would do well to figure out how to improve their shooting from the right-side Defenseman's point position. Defenses can key on it better because it's the preferred shooting lane from up top for the Red Wings, but finding a way to get better from there should be key for the Wings.

Expectations for the Season

The Wings lost a not-insignificant part of their scoring from last year to be sure, but they're also expected to make up for a large part of that with bigger outputs from a healthier Pavel Datsyuk, Henrik Zetterberg, and Stephen Weiss. System-wise, there's probably not going to be much difference in the rate locations as shown by the War-on-Ice charts, but I think what is essentially the same lineup from last year should be able to improve simply by nature of being healthier in key areas and more-experienced in others.

I'm not sure we're looking at a top-five offense for the Red Wings, but I do think they'll be able to crack the top ten.