Mike Babcock's Coaching Decision: If Detroit Must Lose, They Should Lose Smart

Share All sharing options for: Mike Babcock's Coaching Decision: If Detroit Must Lose, They Should Lose Smart

The worst-kept secret in hockey right now is that Mike Babcock is going to be the NHL's highest-paid coach next season. That information in itself is fairly useless in terms of bidding wars because none of the teams rumored to be interested in him are running against internal budgets that are going to make them flinch at the idea of paying the biggest name in head coaching anywhere from $3-6M. For all the talk about Terry Pegula or the Toronto Maple Leafs being "filthy rich", people forget that Mike Ilitch sits atop a multi-billion dollar empire. Unless somebody ponies up a $200M salary for a head coach, the dollars don't matter.

However, among all the teams in the running, Detroit is the only one who has any reason to hold back on a monetary demand (though they've promised money would be no object). As we previously covered, there are reasons Detroit could do well to part ways with Mike Babcock. They know exactly what they're getting in Babcock and have enough information to gather whether spending those dollars will be worth it. While Babcock brings with him a new-found excitement for any team other than the Red Wings that signs him, a return to Detroit simply be a return to status quo.

Do the Red Wings Want Mike Babcock Back? 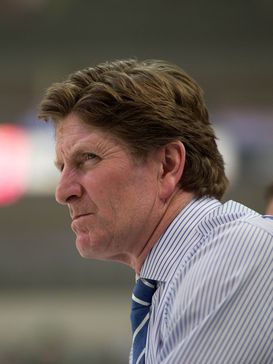 Mike Babcock will be the NHL's most-sought free agent: do the Red Wings want him?

Economically, Babcock could cost more to another team because he's actually more valuable to them. Babcock's return isn't selling any more season tickets for the Red Wings nor generating any more marketable buzz for the team. Not in Detroit at least. Sure, the season ticket bases in Edmonton, Toronto, or Buffalo are strong, but at the very least, Babcock might be able to get the jersey-tossers in those cities to pony up for replacement threads.

The PR optics of Mike Babcock leaving Detroit are as potentially damaging to the team brand as another team winning a bidding war would be beneficial. If Babcock decides to leave the Wings, they'll need to find a way to spin that against delivering an offer every bit as big as the winning bid or the statement about money being no object will come across as dishonest. To spin the hurt of not being the team that Babcock thought would be the best one to coach will take massaging the message against the rumored (and seemingly debunked) demand that Babcock essentially wants GM-level powers. Ken Holland will have the Detroit press to help him graciously lose a bidding war, but he'll have to do a better job than Peter Chiarelli did when he had the Boston press help lessen the sting of running Tyler Seguin out of town.

The Wings can't turn their back on Babcock, but if they want to find a way to lose him without causing trouble with the fans who disagree with that course of action, their best bet is to play up the "roster control" angle as something they weren't in a position to offer him. If the bucket-carrying press is good to him, they'll help remind fans that Mike Babcock has been touting the strength of the coach/GM relationship being a two-way street for years and spin how disingenuous it is for a coach to demand all the votes despite his "win now" motivation not always running in step with the "build a successful franchise" motivation he himself has ascribed to the GM position.

It's a dangerous balancing act between defending your own interests and smearing the guy leaving (who no doubt has plenty of ammo he could fire back Detroit's way if things aren't handled well and the situation gets ugly), but in the event of Babcock's departure, Holland's job is to sell the move to the fans as something they wanted. This is a harder sell now that Babcock has specifically answered the "more GM power" question, but losing a coach because he thought he could be more successful elsewhere hurts a lot.

Turning a Loss into a Win

The next two months are going to be very interesting. Babcock officially becomes a free agent on July 1st. With new draft pick compensation rules in effect for the NHL when it comes to hiring head coaches, I think that if they have a strong feeling that Babcock is leaving, Ken Holland's best bet is to creatively broker a way to get him signed elsewhere before his contract expires. This hasn't been done in the NHL before, so it's not entirely clear what the rules are in regards to treating a head coach like a pending UFA in terms of trying to "trade him" at the draft, but Ken Holland has pioneered creative means of general managing before. I'd like to see him do it again.

The problem here is that so far, all we know of the rule that allows for compensation in this situation is that Mike Babcock's hiring would be considered an offseason hire and the compensation for that is a third round pick to be given up sometime within the next three years (obviously a bad team now would want to wait until they become a good team later before handing over the pick).  Nobody has been able to provide any clarity as to whether there's any level of negotiation available where a team would be allowed to sweeten the compensation or promise that the pick will happen in a specific year. Without such clarification, we're forced to assume that it's not allowed.

However, if it is allowed, the Red Wings would be foolish not to treat Babcock like a pending UFA, provided the coach tells Holland he doesn't intend to return to Detroit.

This is why I believe Ken Holland recently opened the window for Mike Babcock to talk to other teams, but also announced that the window closes at the end of May. This gives him the entire month of June to let teams worry about how other teams' presentations to their coach went and get nervous enough to negotiate for early access. We'll see if it pays off, but I think Kenny Holland is a smart man and he's running a smart plan for the possibility that he might lose a coach with whom he doesn't want to part ways.