After not drafting a defenseman in the 2014 NHL Draft, and a couple of question marks in the pipeline of young defensive prospects, the Red Wings entered the 2015 Draft determined to bolster their core of young blueliners. Since they did not have a 2nd round pick due to the trade that brought Erik Cole to Detroit, they looked to the mid-round draft picks to find their guy. When the third round commenced, activity from Ken Holland halted. They knew who they wanted when they were on the clock at 73rd overall. The Red Wings selected Finnish right-shooting defenseman Vili Saarijarvi in the third round.

After playing a year in the USHL with the Green Bay Gamblers where he posted 23 points in 57 games, Saarijarvi had an eye-opening U18 World Championship performance where he was a point-per-game player over the course of 12 games, the small, yet mobile and elusive defenseman showed that he has all the tools to be an impact offensive defenseman. At the end of the U18 WJC Tournament, Saarijarvi was the most-scoring defenseman, and had been named to the All-Star Team. He had the most points, goals, and assists out of all defensemen in the tournament.

After being drafted by the Red Wings in June, Saarijarvi was drafted by the OHL's newest franchise - The Flint Firebirds. The five-foot-nine spark plug had recently planned on playing with Karpat in Finland. Problem is, Saarijarvi would have likely been a 7th defenseman, seeing limited playing time. Albeit at at a higher level of competition than the OHL, it was clear that Vili had some decisions to make.

Special teams? He's perfect for it. Due to his quick and crisp first pass, Saarijarvi is able to transition the puck from his own zone, through the neutral zone at a level above what he's at currently. Additionally, his soft hands and smooth skating make him a primary candidate to QB a power play. This Finn has vision for the game, and a sharp hockey sense that can create offensive potency on the attack.

On July 3rd, the Red Wings signed Saarijarvi to a three-year entry level contract which all but confirmed that he would be staying in North America to play in the OHL, and even better for the organization, just over an hour up I-75 in Flint, Michigan. Smart move by the kid, as he'll get to play top-minutes in a Canadian Junior League. Not to mention he'll be able to adapt more to the North American style of hockey. 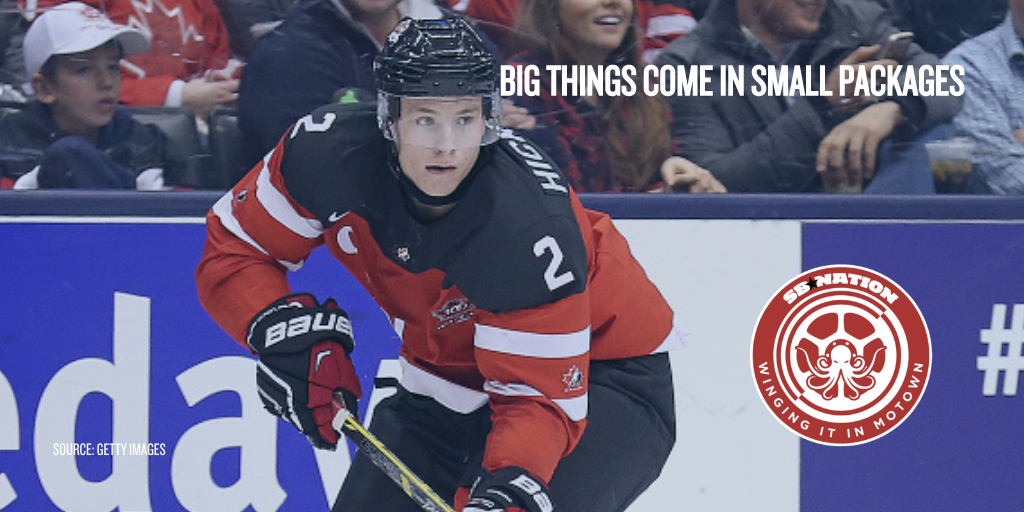 When the Red Wings invited Joe Hicketts to development camp, they had no idea just what kind of player he was. Or did they?
If you could point out any flaw in Saarijarvi, it would obviously be his size. Weighing at 163 lbs, he's quite easy to push off of the puck. Where the Flashy Finn lacks in size, he makes up with raw skating abilities. The brisk-footed blueliner could honestly be compared a lot to the likes of former Red Wing Brian Rafalski. Small, but aggressive, and keen to executing a precise transition game. It's early to tell, but I have a good feeling about this kid. Small? Yes. A bit scrawny? Sure. He's still growing, and with more training and development he can bulk up and fill in all the holes. The important thing is that Saarijarvi possesses all of the abilities you simply cannot teach with development.

Skill, skill, skill. The Red Wings need it on defense, and they're making moves to get it, whether it's signing free agent Mike Green or stealing undrafted Joe Hicketts or bringing in Robbie Russo to hope he pans out for them. In the case of Vili Saarijarvi, the word that keeps popping up in descriptions about him is "dynamic." He's a former forward, so it makes sense that he's most comfortable in the offensive zone, even with his move to the blue line. He's also able to get the puck up ice and key an attack with his ability to handle the puck.

The ironic elephant in the room is that Saarijarvi is tiny, and that word shows up about as often as "dynamic." As of now, his size hasn't been a detriment to his game, and he's pretty smart about knowing how and when to use his body effectively to keep or gain control of the puck. At just 18 years old, he's still got plenty of growing to do, even if it's mostly in his frame and not so much in his height. There are obviously no guarantees with any prospect, but I like the chance the Red Wings took with Saarijarvi because he can definitely be the player he is at a higher level of hockey with some time to develop, and his game is the kind that's worth trying to develop with his overall dynamism from the blue line despite his size.

Kids should stay in school

Vili Saarijarvi (pronounced Sar-A-Jar-Vee) is the talented offensive defenseman the Wings chose with their 3rd round pick in the 2015 draft and he’s already become my favorite new prospect. The first thing that stood out about him in development camp was his exceptional skating, both speed and mobility. He’s smallish, Griffins coach Todd Nelson was dead on when he said "When you look at him  he’s not a very big guy but he plays strong. He’s a strong skater, he’s not timid at all, and he goes into the corners with passion".  He was a forward until 4 years ago, and the forward offensive instincts remain. He has a very hard shot for a small player, has a fantastic one timer, smooth hands and, and quick wristers. His defensive game is adequate, and for a player who’s valued for his offensive contributions that’s perfectly ok. He has smarts, vision, and creativity with the puck and he’s a lot of fun to watch. I’m thrilled he chose to play in Flint this year because it will benefit his development and he’s closer to home so I can watch him in person.


He’s a fun loving, sweet kid who’s a blast to talk to. I got to get to know him in development camp this summer and he’s such a charismatic kid that it’s impossible not to love him, plus his name translates to Island Lake which seems perfectly fitting somehow.


Last year in the World Juniors, Saarijarvi was named the best defenseman in the tournament, and had the most goals, assists, and points by a defenseman.When I think of Saarijarvi I think of an exciting, dynamic, offensive defenseman with the potential to be an NHL PP quarterback and a coveted piece on the back end. Some players have that energy about them that allows them to be more effective and impactful than other players with similar skill sets, and Vili is one of those players. He’s a great presence to have in the locker room in addition to being a great asset on the ice, there really isn’t much not to love about this kid. Plus, he’s only 18 so there’s plenty of time for him to continue to mature and get even better.


I don’t think I’ve ever fallen in love with a prospect this soon after drafting him. He’s exciting, talented, dynamic, fun, and has so much potential. I can’t wait to see what this season holds for him!

Winging It In Motown


This pint-sized defenseman from Finland is a guy to definitely keep your eye on. If you can make it out to a Firebirds game in Flint, I highly suggest making the trip. Hey, you might even see me there!