If you were to go back, say, one or two seasons, the prospect system looked vastly different than it does now. The Red Wings scope of young talent has grown more and more promising over the past half-decade or so, but it's recently become one of the better crops in the NHL. The guy we're talking about today is one who most any Red Wings faithful would know, and the perception of this kid over the past year has changed in a big way for whatever reason. As I said before, the system looked a lot different if you went back a year or two, more specifically - Ryan Sproul was considered to be "the guy" in terms of future defensemen. He seems to have it all: Size, skating, offensive instinct, and defensive abilities that have been steadily improving. Fast-forward to current day, and Ryan Sproul seems to be the odd man out. Why is that?

It's simple, really. Sproul has seen one NHL game since the Red Wings took him in the 2nd round in 2011. If you ask me, that's not his fault. It's an organizational issue. Simply put, the Red Wings have had a bad tendency of locking up defensemen on contracts that ensure a logjam among their prospects. Ryan Sproul, former 2012-2013 CHL Defenseman of the year, has seen little-to-no time in the NHL since he signed his entry level contract in March of 2012. With players like Xavier Ouellet, and Alexey Marchenko soaking up all of the call-ups, we haven't really had a chance to see what Sproul will be like at the NHL level. All we have seen is that one game against the St. Louis Blues, in which he played his ass off, and looked really good. But, I digress - It's nothing more than a sample. My gut tells me that out of all the Red Wings prospects on the blueline, Sproul has the highest ceiling given all of the tools he has. 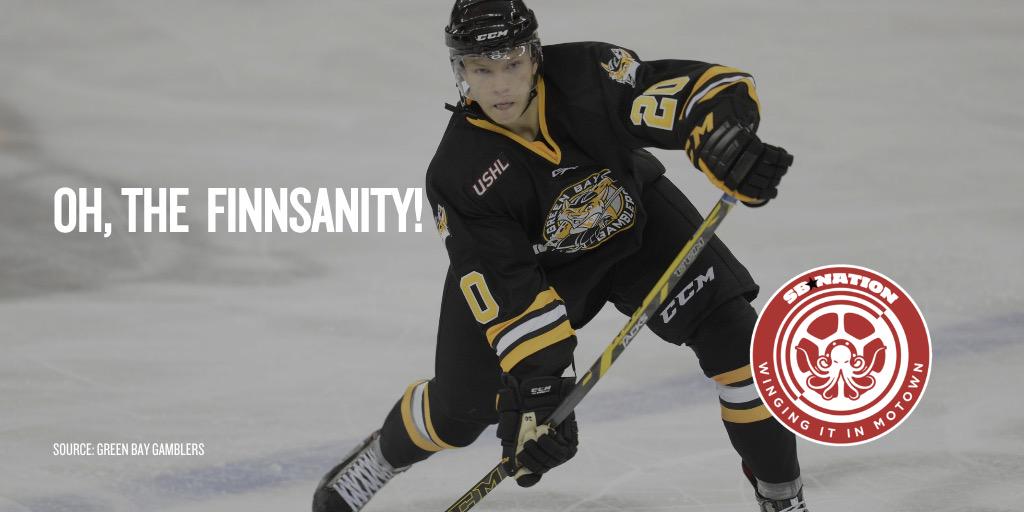 If you're a fan of Sproul, you might also want to check out our article on Vili Saarijarvi

It's baffling to me, Ryan Sproul has all of the necessities for an ideal every day NHL blueliner, yet we never see him among names for call-up options. Sproul had a standout rookie season in the AHL with 32 points (11g, 21a), but saw his production dip in his sophomore season where he only had 24 points (5 g, 19a) through 66 games, and only saw five games in the playoffs. Jeff Blashill had him scratched for the majority of the Calder Cup Playoffs, and that could be my first criticism of Blash. Why sit a six-foot-four, 207-pound defenseman who has a booming right-hand shot, and the ability to be a hotshot QB on the power play? The knock on Sproul is that he has a tendency to make those bone-headed plays in his own zone that can end up being costly. I will say this - He has come a long way since his days in the OHL. Every year he seems to get better with his puck management. Another thing that you could criticize with Sproul is that he doesn't use his frame to the fullest potential. If he were to use that big frame to his advantage more, it would greatly improve his game when he doesn't have possession of the puck.

Sproul was impressively offensive in the OHL and when the Wings drafted him in 2011 they hoped he’d carry that offensive flair into the AHL and eventually the NHL. Unfortunately his defensive deficiencies carried over to the AHL better than his offensive numbers and last year in Grand Rapids, he was far enough down the depth chart that he was a healthy scratch in 21 games including 11 in the playoffs. The scouting reports on Sproul have always referenced the fact that he needed to fill out, get stronger to play against, and improve defensively. The belief, or at least hope, being that he could grow enough as a player that  his defensive game wouldn't’ be a hindrance, and his offensive game would be an asset at the NHL level; that his offensive game would be good enough that it would more than make up for his defensive game. Unfortunately that hasn’t happened yet, and after 2 years in the AHL he’s slipping further down the defensive depth chart rather than climbing it.

He has a cannon of a shot but after one of his cannon blasts destroyed Mitch Callahan’s mouth and jaw a couple seasons ago he’s been reluctant to use it. His offense at the AHL level has been ok at best, but for an offensive power play specialist with mediocre defense, ok isn’t going to cut it. The Wings recently signed Robbie Russo to a contract, and he looks like he’ll be everything they hoped Sproul would be plus some, and he’s further ahead in his development.

It’s pretty difficult not to be disappointed in Sproul’s lack of development, but he was always a risky bet with a lot banked on his capacity for improvement and growth. Sproul isn't’ a hopeless case by any means, but I think the Wings have so many better defensive prospects that it’s time to prepare to try and get something in return for him. This upcoming season will be very significant for Sproul and he’ll either have to show he has what it takes to continue to be a Wings prospect or, in my opinion, the Wings should trade him for whatever they can get.

Ryan Sproul was the Wings' third  pick in the second round of 2011's draft after Tomas Jurco and Xavier Ouellet. While those two have fully established themselves as NHL-capable, Ryan Sproul spent last season going from one of the top defensive prospects to the guy who looks very much like he's going to end up a reclamation project (and possibly not one in Detroit). The tall, offensively-minded right-shooting defenseman dropped his goal production in Grand Rapids by more than half and ended up a healthy scratch late in the season as Jeff Blashill simply didn't have space for him in the Griffins' defensive scheme.

I honestly thought Sproul should get a shot playing with the big club because I thought he was the type of prospect who needed the big league challenge to shine. However, after this season I don't know if it's a problem with Sproul's attitude or his hockey IQ, but I'm not comfortable saying he's learned everything he needs to have learned to be playing with the Wings. It's probably because the Wings have enough guys I want to see play with them and not enough room for all of them that I'm not worried about the 22-year old Sproul's chance until he's dominating the AHL.

All-in-all, I think Sproul has plenty of room to grow as a player, but with his contract up at the end of next year, time is of the essence for the 22-year-old defender from Mississauga. I wouldn't say it's all on him, as he's had impressive numbers. The problem is that the organization has far too many defensemen, and the Red Wings need to make room to facilitate these players. If they can't, then they need to be traded so that we do not end up losing them for nothing. I say this because believe it or not, when Sproul is waiver-eligible, he will not go unclaimed.