It was tough to decide, but Turgeon's two-way style of play has him ranking in the bottom part of our top 15.

Throughout history, the Red Wings have put a lot of stock into finding what we call "late round gems" in the hockey world. Essentially these are players who get overlooked, and see their draft stock plummet. This is where Ken Holland and his band of merry men have flourished. They've brought players like Pavel Datsyuk, Henrik Zetterberg, Gustav Nyquist, and Teemu Pulkkinen to Detroit using draft picks outside of the top 30. One of the many tactics Holland has been trading down a higher first round pick for two lower picks. Very rarely do we ever see the Red Wings trade up in the draft, as it usually ends up as being an overpayment. The prospect we're talking about today was one that the Wings traded up to acquire. In the 2014 NHL Draft, the Red Wings moved up 13 picks in the 3rd round (76th to 63rd) to snag centerman Dominic Turgeon of the Portland Winterhawks. 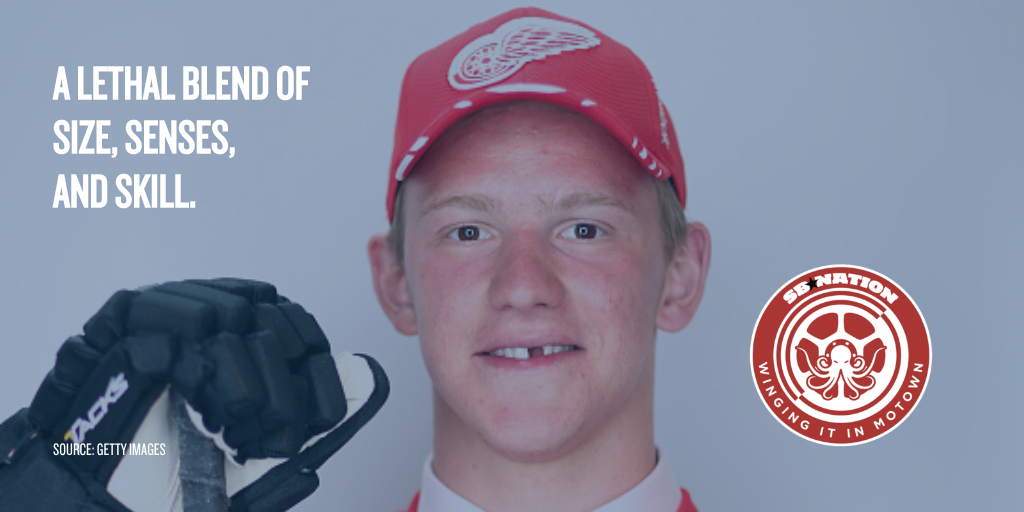 He might be new, but Evgeny Svechnikov's ceiling as a top-six forward has him high in our rankings.

Dominic, son of former NHL star Pierre Turgeon, is a bit different than what his father was. Dom is more of a shutdown two-way bottom six center, with excellent vision, and raw offensive abilities. As I said before, Turgeon has been designated to a shutdown two-way role with Portland in the WHL, but hopes to be put into a position to provide more offense in his fourth season with the Winterhawks. His abilities with offense haven't boasted impressive numbers, with just 82 points in 187 career WHL games, but he has steadily increased his point production each year, and has shown that he has a bit of raw, developable offense to his game. He may not have the flare of his father, who scored over 1000 points at the NHL level, but Dominic is a smart player with excellent vision, and hockey IQ.

I'm sure a lot of folks would speculate on having Turgeon in the top 15 Red Wings prospects, but the fact that the organization felt it necessary to trade up to acquire him speaks volumes, in my opinion. You could call it questionable asset management, as Dominic Turgeon would have likely been available at the pick they had initially, but something made the 195-pound center a "must-have" for Ken Holland and his front office. Let's also not forget the praise that Jeff Blashill gave Turgeon after Development Camp in July:

"I think confidence with the puck is something he'll continue to get better at," Blashill said. "He's a guy who naturally wants to defend, naturally wants to play from the right side of the puck. He doesn't take a lot of chances offensively as a result. What's positive about that is it makes you a real good defensive player. The negative is you have to learn to take a few of those chances in order to become a better offensive player."

"Our former assistant in charge of video, Keith McKittrick, is an assistant coach in Portland," Blashill said. "He said great things about (Turgeon) as a person, as a competitor, as a hockey player. He thinks he's real smart. He comes to work every day to get better and I thought that showed in the camp."

The obvious downside for Turgeon is his lack of offense. However, as a player who is projected as a bottom-six player, I'm going to cut the 19-year-old some slack. He still has time to develop his offensive abilities, and I wouldn't say that his tenure in Portland has maximized his offense since he's been looked at as a shutdown-type player. I have reason to believe that when he's brought to the next level, he'll be given more chances to show what he can do in all three zones.

Dominic Turgeon is an extremely mature, details-oriented center who takes pride in the defensive side of the game. He’s an outstanding checking center who smothers opponents, blocks shots, kills penalties and has shown the ability to dominate in the faceoff circle. He’s a very smart hockey player who knows where to be in all three zones and the Portland Winterhawks coaches relying on him in the toughest situations speak as a testament to how much they trust him. He plays a heavy game and hasn’t yet displayed all he has to offer offensively.

When the Wings drafted Turgeon in 2014, Red Wings chief amateur scout Jeff Finley said “We had him in our top 30 … We think there’s more offense and we just like everything about his game … He’s very responsible, great on faceoffs, he’s (Portland’s) No. 1 penalty-killer, blocks shots, he’s always in the right position to support the puck in all three zones. In those parts of the game, he’s very mature for a young player. We’ve seen some things as far as offensive upside and we hope with a bigger opportunity he’ll be able to show a little bit more than what his numbers were (in his draft year).”

Turgeon’s been used is a heavy shutdown role in Portland and his offensive numbers reflect that usage. The Western Hockey League is the most defensive league in the CHL and scoring is much lower than in the OHL or the QMJHL. For context, he was 6th on his team in scoring last season with 43 points (18G, 25A). He knows he needs to increase his offensive contributions to make it to the NHL and be successful, but I don’t expect offensive to be his bread and butter at higher levels. In many ways he reminds me of Zach Nastasiuk, a gritty, hard working, mature, player whose ability to shut down other players and be relied upon by coaches in the toughest situations.

He took a noticeable step forward in his development in the last year, and in development camp it was easy to see his improvement. He looked more confident and Red Wings Coach Jeff Blashill said Turgeon made a really good impression with him in this year’s camp. Skating has always been talked about as a weakness with him, but improved markedly in the last year and he’s passionate about using his improved skating to help him score more goals. Turgeon is a determined, intense, dedicated, hard working, mature kid who will work his butt off to do whatever needs to be done. Working on upping his offensive game this season is one of his biggest goals.

Turgeon has the potential to be a shut down 3rd liner in the NHL, who can also contribute modestly to offense. He has 1 more season in the WHL, potentially 2 if he returned for his overage year and I expect him to make noticeable strides in that time. He has a lot of hockey IQ, decent skill sets, a work ethic like very few his age, and a maturity few posses. The Wings were high enough on him to trade up to get him in the 3rd, hopefully Dominic is able to live up to those expectations.

It was recently on May 9th that Dominic Turgeon achieved his first NHL contract when he signed his entry level deal with the Red Wings. He will spend one more season with the Portland Winterhawks looking to develop his offense, and ready himself for his next step to the AHL. Turgeon might not have been ranked by all of us, but I would keep an eye on this kid. The praise he receives from coaching, and front office associates tells me that he could be something special one day.