Tweet Share
 Tweet Share on Twitter Share Share on Facebook Pin Pinterest 68 Comments ⋆ Rec Recommend this Post 3
There’s a longstanding debate in Hockeytown regarding the relative merits of Sergei Fedorov’s career, and whether or not his number deserves to hang in the rafters next to the likes of Gordie Howe, Steve Yzerman and Nicklas Lidstrom. With Fedorov recently accepted into the Hockey Hall of Fame, and with the Joe's final season approaching, it’s time to put this debate to rest. Here are four reasons why Fedorov’s jersey should be retired.
1. The Numbers: Take a look at Fedorov’s stats with the Red Wings: he ranks 5th in points, 6th in assists and 4th in goals. He averaged 1.05 points per game, 4th in Wings history. Keep in mind that Ted Lindsay and Sid Abel, both of whom have their numbers retired, are 9th and 17th in points scored, respectively. To top it off, Fedorov has the most overtime points in a career: not just for the Red Wings, but in the entire NHL. Talk about clutch. 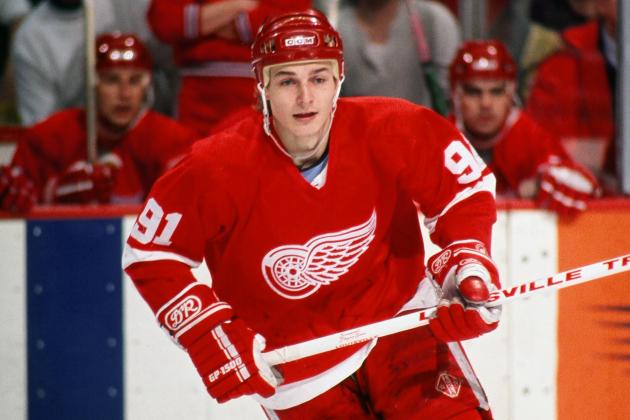 2. The Playoffs : Fedorov was a prolific scorer in the regular season, and he was able to maintain that pace in the playoffs, when the opposing team’s defense would ratchet up. Fedorov maintained a point per game pace, tallying 11 game winning goals in the process. His 5 shorthanded goals are the most by any Red Wing.
3. The Awards: A Hart Trophy for league MVP. Two Selke Trophies for best defensive forward. A Lester B. Pearson Award. Three time Stanley Cup Champion. The accolades are impressive, and there are few (if any) players whose numbers would not be retired if they boasted the same resume as Fedorov. As league MVP, Fedorov joins the ranks of Gretzky, Lemieux, Messier and Howe.
4. The Leadership: Many who argue against Fedorov’s jersey retirement claim that, without his captain Steve Yzerman leading the way, Fedorov would have just been a selfish player on a good team. But the same question could be asked about Stevie Y: Would he have been as successful without Fedorov at his side? Both were explosive scorers who rounded out their game to become some of the best two way players in the league (Coach Scotty Bowman even played Fedorov on defense once in a while). While one was a Canadian boy who was at home in Canada’s game, the other was a Soviet Union defect who crossed language and cultural barriers to play the game he loved. While Fedorov may have come across as indifferent to the team’s success, his interviews and results suggest otherwise.
Without Sergei Fedorov on the Red Wings during their three Stanley Cups under Scotty Bowman, they would not have been as successful as they were. Fedorov’s results prove that he is not only a Hall of Fame player, but worthy of being the last to wear number 91 for the Red Wings. With the stadium he played in closing its doors, the Red Wings organization should make the right decision and retire his number during the farewell season at the Joe.