We've all lamented over the course of this season about the lack of defensive support on this team. Many readers, posters, and commenters have extolled the virtues of either making a trade or picking up a free agent this off-season - someone like Sami Vatanen, Oliver Ekman-Larsson, and even Erik Karlsson. Regardless of the level of seriousness behind these suggestions, the past few years should prepare us all for no big names to move to the Red Wings unless they're past their prime. For anyone who believes otherwise, please visit here.

After this morning's news about Pavel Datsyuk, and the comment in the Detroit Free Press article that neither Datsyuk's agent nor the Red Wings will look to trade his contract, the reality is a grim one. This team is going to struggle in the free agent and trade markets this summer because of cap constraints, especially with several players of our own to re-sign. Any help brought in from outside the organization is going to have to be of the bargain-hunt variety.

So who's out there who can help? Do they come at the right price? Will Bob Barker come make fun of us if we bid over what they're worth? What exactly are the Wings' needs aside from "ERMAHGERD WE NEEDZ DA DEFENCES"? 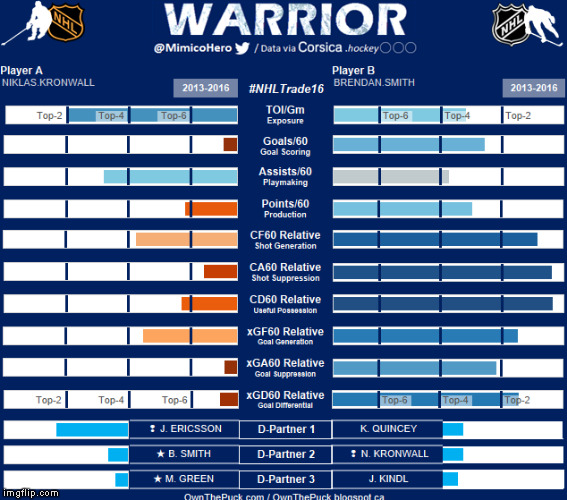 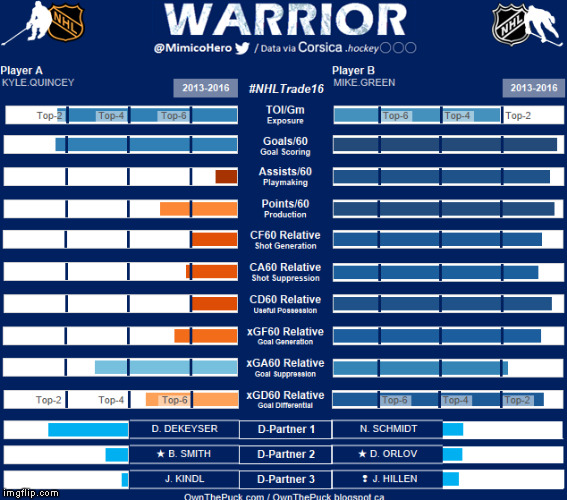 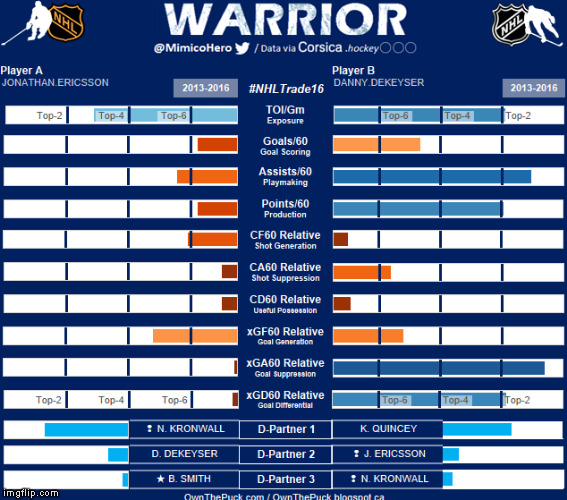 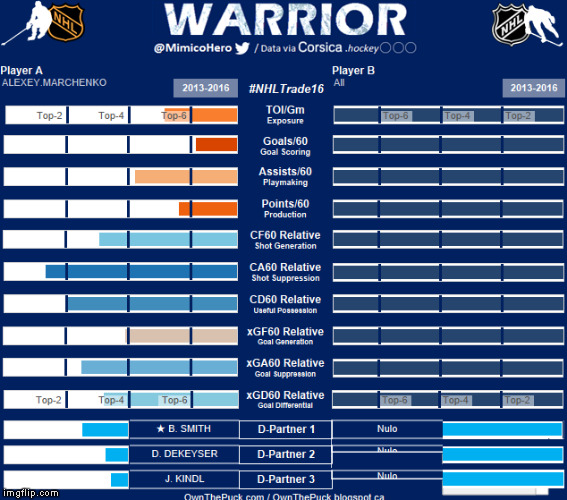 Looking at this, it seems that we have 3 out of 4 of our two top pairs worked out. Not that the Red Wings coaching and management will deploy them as such, but that's for another post. Assuming we are looking for a top-or-second-pair defenseman to play in some combination with Dekeyser, Smith, and Green to fill out the top 4, and leaving Kronwall and Ericsson to share time with Marchenko on the 3rd pairing, here are a few suggestions.

The 25-year-old defender has had a fairly productive season in the desert. Given that OEL garners the majority of the attention, Stone may go overlooked as a solid blue-line asset. Deployed as a 2nd pair/borderline top pair defender in Arizona, Stone had a very productive year with 36 points, 14 on the Power Play, on a team that missed the playoffs. To put that in context, compare that with Mike Green's 35 points that led the Red Wings defense this season.

His fancy numbers don't look terrible either. I've compared him with Dekeyser below - while he does lack in some categories, Dekeyser seems to be able to compensate with his skills where Stone lacks. The opposite is true as well. The only problem may come with Shot Suppression, where both Stone and Dekeyser appear to be pretty bad. However, if used as a 2nd pairing, it may be possible to hide this deficiency. 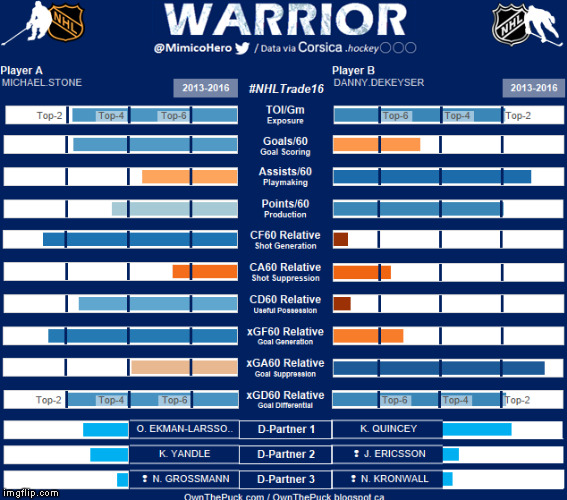 As for cost, Stone is in need of a new RFA contract in '16-17 with a price-tag from this season of $1.15M. If management could swing sending a certain dead contract Arizona's way along with some other assets (like helping to clear the defensive log-jam) or draft picks, I'd say this could be worth looking into. With Shane Doan's $5.5M contract up and no certainty about his playing career next season, maybe Arizona would like a few high-dollar contracts?

Ekholm plays the second pair in Nashville, who demonstrated earlier this season that they're willing to move defensemen for offensive options. Currently, Nashville is in a similar spot to Detroit with lots of defensive options but not enough spots. Shea Weber, Roman Josi, Ryan Ellis, Barret Jackman, Stefan Elliott, Petter Granberg, Anthony Bitetto, and Corey Potter all saw playing time this year in addition to Ekholm. 9 guys for 6 spots is not easy math.

Looking at Ekholm's Warrior Chart, he has the look of another 2nd pair guy who could possibly compliment Smith or Green on a top pairing. I think his best fit would be with Dekeyser though, as Ekholm is someone who can drive possession and goal generation while still remaining defensively responsible. A Dekeyser and Ekholm pairing may struggle with generating shots, but that could become a moot point if the shots they DO generate lead to more goals. Ekholm himself was credited with 8 goals this season, along with 27 assists for 35 points, and played all 82 games. 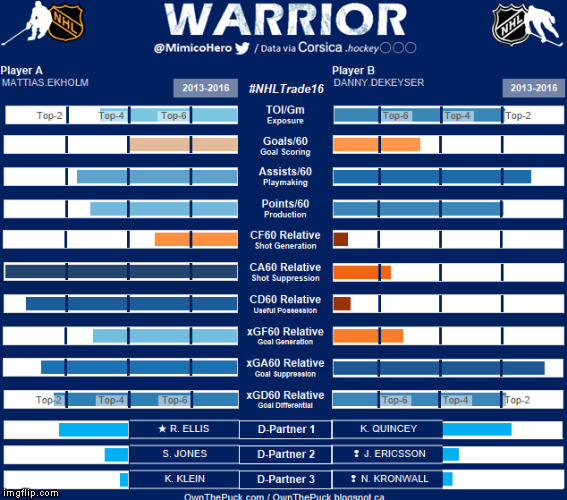 Ekholm is 25 and has a new salary kicking in next year at a cap hit of $3.75M until 2022 (per General Fanager). If we let Quincey walk, Ekholm slides in just under his current contract value. This could be viable if we are willing to part with an inexpensive, cost controlled veteran like Riley Sheahan and a pick. Nashville will almost certainly be looking for cap space when they need to re-sign Ryan Johansen after next season.

In my opinion, we need to pull a bait and switch with Anaheim for this guy. Come to the table asking about Vatanen or Lindholm, end up with Montour. I have every confidence that the Ducks front office is doing everything they can to be able to make room for both Vatanen and Lindholm this summer. They aren't at risk to lose any other major defensive pieces this summer (no, Korbinian Holzer isn't a major defensive piece), and that would be huge for their front office to have the blue-line sorted out for at least another 2 seasons.

If Erik Karlsson had ever spent any significant time in the AHL, I think Montour's stats this year would look a lot like what Karlsson would have done. Per TheAHL.com, and as of April 10th, Montour has put up 55 points (12G, 43A) in 66 games as a 21-year-old rookie for the Gulls (he turns 22 on the 11th). He ranks 3rd among all rookies in points, 2nd among all defensemen, and 18th overall. He's also 2nd on his team in points, having been recently passed by veteran center Chris Mueller (56 points). Montour is almost 20 points ahead of the next Gulls defenseman, Shea Theodore (50GP, 34pts).

Montour has taken 159 shots on the year, 2 behind team leader Mueller. Without a lot of fancy-stats tracking for AHL players, it's only my best guess that this is an indicator of him driving team offense. If this translates to the NHL, admittedly a big 'if', it will be a home-run for whoever plays him. Maybe he could be pried away in exchange for someone like Evgeny Svechnikov or Anthony Mantha, but maybe that's not worth it. It's tough to tell with guys who have only played in the AHL. But, if there's only one guy to bet on, Montour would be a solid bet.

In all likelihood, meet the newest member of the Detroit Red Wings blue-line. Considering his performance this year and how much Ken Holland always "likes our talent/team", it's hard to see Russo as anything other than the next man up. His 39 points in 67 games are the best of any Griffins defender, and his +45 is more than double that of the next highest Griffin (Xavier Ouellet with +22). I know there are significant shortcomings of +/- as a trackable stat, but there's no way Russo has just managed to be getting on/off the ice at the right time all season.

Michelle (@slapshotgoal) was nice enough to waste some time with me earlier on Twitter, where she mentioned that the Ouellet/Russo pairing has looked like the top defensive set for the Griffins lately. If Russo is already looking like one of the top guys in Grand Rapids, the expectation should certainly be there for him to show up to camp this off-season looking to steal a regular roster spot. With a cap hit of only $680K and a new RFA contract needed for the '17-18 season, he's certainly the most affordable option I've listed and we don't have to give anything up to get him.

With a cap crunch seemingly imminent for the '16-17 season, the Red Wings will either have to make some blockbuster moves or know how to find another diamond in the rough. As fans, all we can do is watch and hope that affordable improvements can be made. Wishing on a magic lamp has never been a bad option, either.

Who can the Red Wings obtain to help fix the defense?