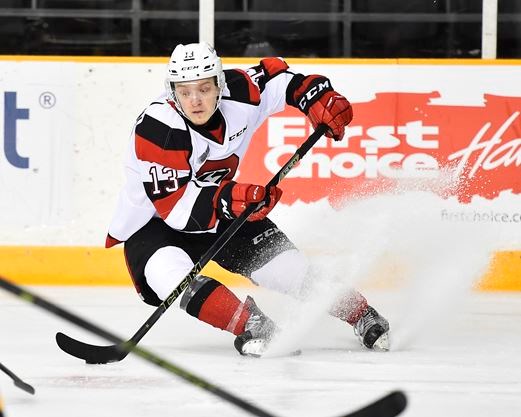 Artur Tyanulin is one of a few highly prominent overaged players that are eligible in the 2017 NHL Entry Draft. Along with Petrus Palmu and Ryan Moore, I would consider Tyanulin to be one of the 3 best overaged forwards available from the OHL.

Tyanulin is an extremely skilled offensive winger that boasts some of the best hands in the entire OHL. This is reflected in the coaches' poll this year, where he was voted as having the best hands in the entire Eastern Conference. They are incredibly silky smooth, which is complimented by his excellent skating and fluid, shifty, unpredictable lateral movement. A superb setup man, he oozes creativity, and seems to have eyes on the back of his head. He possesses an excellent stick, showing a knack for mugging players that have let down their guard off the puck and driving the play the other way. He has all of the tools that you look for in an elite offensive winger, and being passed on twice in the draft, he is going to either be a very late round pick, or is not going to get picked at all. He's the type of player that you watch their highlight reel, and you're at a loss for why he was passed on twice

What makes him stand out particularly is the fact that he produced at an excellent pace on a very lackluster team this year. His +/- doesn't reflect a deficiency in his two-way game, so much as it reflects the fact that Ottawa was a putrid diaper inferno of a team, and was only in the playoffs because the Eastern Conference of the OHL is incredibly weak to begin with. His GF%Rel was actually +7.43%, meaning his goal differential was actually better than his team's average. His rate of A1/60 at 5v5 is the 3rd best of any forward in the OHL. The only two players ahead of him are Dylan Strome (who is the same age as him) and Taylor Raddysh, and they have the benefit of playing for an offensive juggernaut in Erie. He also stands 11th in the entire OHL in P1/60 at 5v5. To give you some perspective, here are a list of players that are within his age group that he has outproduced this year at 5v5: Mitchell Stevens, Petrus Palmu, Jeremy Bracco, Nikita Korostelev, Mathieu Foget, Anthony Cirelli, Blake Speers, Julius Nattinen. There are quite a few prominent names on this list, including players that have already been drafted. In fact, he's 6th amongst all forwards in his age group in P1/60. The only 5 skaters his age that produces more than him were Dylan Strome, Zachary Senyshyn, Sam Miletic, Kole Sherwood, and Ryan Moore. The point I am trying to make here is that Tyanulin outperformed a lot of his peers who were drafted within the top 90 back in the 2015 this season. Thus, he may be someone worth burning a late round pick on in order to acquire.

In terms of weaknesses, Tyanulin is not much of a goalscorer, and is really below the curb of where you'd expect a player to be in their 3rd time eligible season. He has the instinct to pass before shooting, and that may not be what the Wings are looking for, when you consider the fact that the Wings' offense had a serious inability to generate shots during the 2016-2017 season. I have also heard scouts knock his consistency, in that he can either turn you white as a ghost with brilliant displays of skill, or be invisible out there. At the same time, what's a 6th or 7th round pick to gamble on a player like him? When the reward is so great and the risk is so incredibly small, Tyanulin has a lot that I like, and would be an absolute bargain in June.

Artur Tyanulin is number 1⃣!
Check out the @OHLHockey plays of the week.
WATCH ⬇ pic.twitter.com/9IfwQtwLPH

Anyways, that's it for this one. For my next prospect profile, stay tuned to hear about potential top 60 pick, Acadie-Bathurst Titan center Antoine Morand. As always, until then, happy scouting!