Today's Quick Hits had an interesting line of discussion going, one that got me thinking. It was provoked by Helene St. James' assessment of the impact of the presence or absence of Mike Green in the lineup. The discussion talked about whether that was real, and how much it was affected by other players who also missed time. I had a few hours to goof off today, so I took a look at the numbers.

Here was the question: how much has the presence or absence of any skater mattered to the Wing's success or failure so far this season, considering who else was on the ice in each game? First, I ignored goalies because I felt like it. Second, I couldn't include players who played almost all of the games because we need a decent sample of absences to learn about interactions. For the same reason, I couldn't use players who played very few games because I needed a decent sample of games played.

Ten players met the criteria for having played in enough games but not too many: Mantha, Ehn, DeKeyser, Helm, Hronek, Ericsson, Witkowski, Frk, Green and Daley. That means my quick little study only applies to these players and their interaction with each other. However, I can infer a few things about replacement players by considering how the team does when multiple players on this list were missing.

I coded each player for every game of the season with a -1 if he missed the game and a +1 if he played in it. I then ran a series of multiple linear regressions of those predictor variables against the team's goal differential in each game, looking at all the partial sub-regressions. I also looked at an ANOVA of the predictors to figure out which ones were significant. Basically I kept kicking out players until I figured out which ones mattered and which player interactions mattered.

In the overall regression for all ten players the only significant player was Ericsson, and he had a large positive effect when he was present. It turns out, as I will show, that it came mostly from propping up DeKeyser against the negative effects of Green. However, when I separated the defenseman and forwards, and assessed the effect of the interaction between DeKeyser and Ericsson, it turns out that Green clearly made the most difference so far this season. It is unfortunate that he has a bad effect on DeKeyser, but as long as Ericsson is around it isn't too bad. More on that later.

OK, the last paragraph is a big stretcher, because we don't know causation. It suggests this is about who replaces either one of them. But I will say that the fact the team is worse without Frk suggests he isn't as bad as the coaches think, and maybe his replacements aren't as good as they think.

As for the rest of the forwards, the various models suggest Mantha has been somewhat positive and Helm has been somewhat less positive. Some player interactions actually show Helm as a negative, i.e. the right combination of replacements actually makes it worth replacing him. But the data are noisy enough that I wouldn't place a bet on it.

Back to the defensemen. Green has by far the strongest positive impact on team performance, followed by Ericsson. DeKeyser has an overall positive effect but it is almost completely negated if Green is playing and Ericsson isn't. The results for Hronek and Daley suggest they are interchangeable and replaceable.

The following tables show the predicted goal differential per game for the respective combination of players. The tables show just the interaction of the players listed and represent an average of what the team did as various other players came or went. For reference, the Wings have averaged -0.62 goals per game this season, through 45 games. I color coded the tables with white for bubble-team performance, yellow for the current team average performance, red for much worse and green for playoff-team performance.

I don't want to mislead you by showing predicted goal differentials. For example, I'm not saying that if the Wings just played Frk and sat Ehn, they would make the playoffs. Other players came and went as they played. Injuries have had a huge effect on the team this season, and players like Frk and Ehn received more playing time as better players were injured. You also could be misled if you project these values to total games played, because they represent a vision of a perfect world in which nobody ever missed a game and you always play your best players. The very best models shown in the tables would project out to something like third or fourth in the NHL goal differential at this point, as if somehow that performance could be sustained for an entire season.

So let's just take the following results as a directional indicator of how much better the team might do if they had at a full roster in the other positions.

Let's look at the 2x2 matrices first. If both players are better than other available players, if both make a positive contribution and both have a neutral effect on each other, you would get the highest goal differential when they both are playing, the lowest when they both are not. You would expect the diagonals when one or the other was missing to be somewhere in between. That's certainly not the case for Frk and Ehn. Those of you who cheered for the FrkEhn combo were sorely disappointed. In fact, the matrix is rotated 90 degrees, showing that Frk-In-Ehn-Out was the right combo. 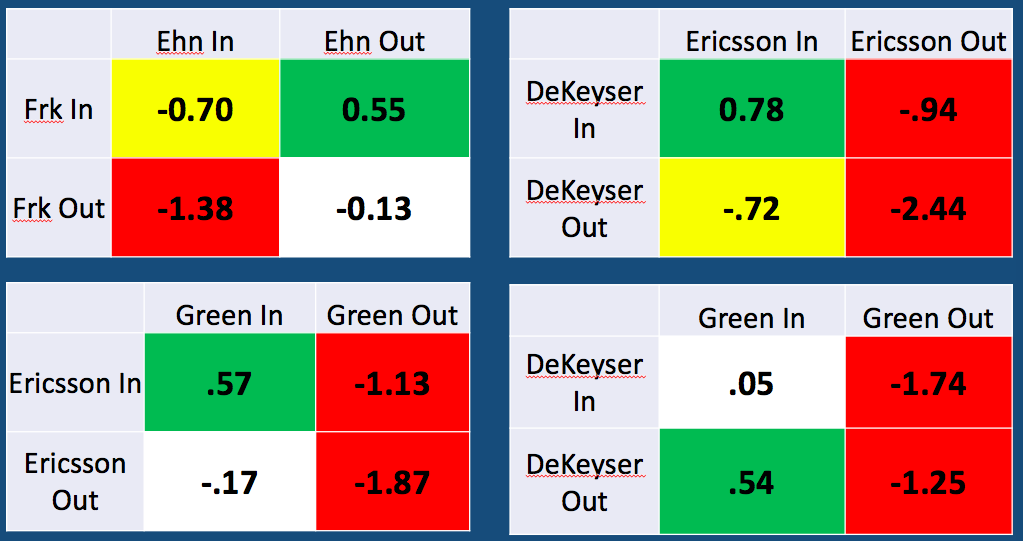 The Ericsson-DeKeyser table is just what you would expect from complementary positive players. Considered alone, this table shows that Ericsson is a bit stronger than DeKeyser. The Ericsson-Green chart shows that Green is much stronger than Ericsson, but Ericsson made a positive contribution whether Green was present or not. However, the DeKeyser-Green interaction is messed up. The strongest combo is for Green to play without DeKeyser on the ice !

I won't delve further into details, but the models I ran show that if Ericsson plays when DeKeyser plays, even if Green is present Danny does OK. But when Ericsson is out of the lineup, DeKeyser falls apart when Green is playing.

The three-way table shows the various combinations for the presence or absence of Green, Ericsson and DeKeyser, ranked from best to worst. This clearly supports the idea that all three make a positive contribution, but we need Ericsson on the ice to avoid the Green-DeKeyser negativity. I made no attempt to look at defensive pairings in every game to understand what was going on. It could be that when Ericsson is out and Green is in, DeKeyser may be paired with somebody else who exposes his weaknesses. I will be happy if somebody wants to dig further, but my goof-off time has expired. 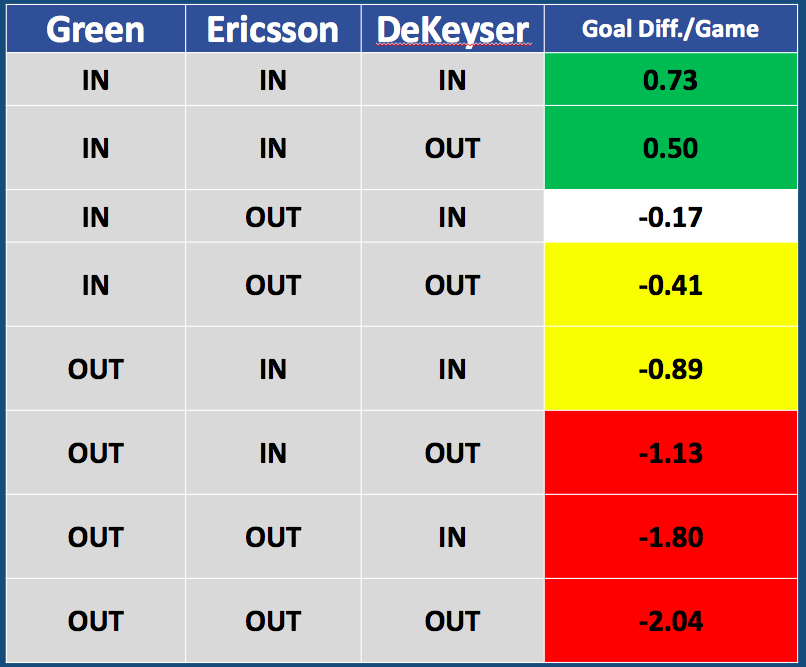