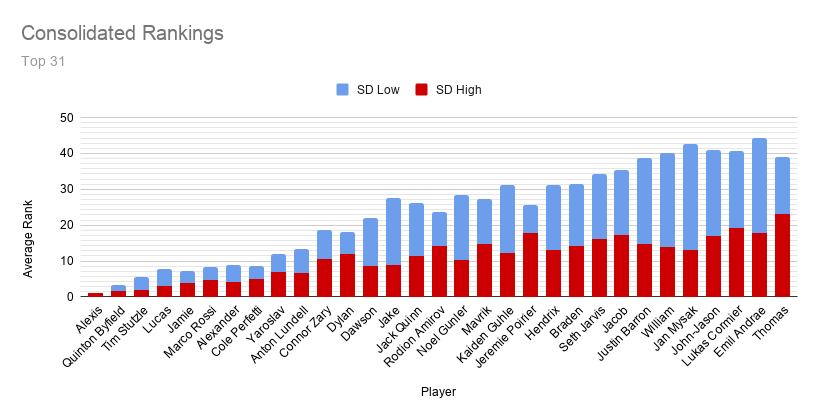 I’m going to share with you a project I’ve been working on over the season in regards to the upcoming NHL Draft. Some of you may remember MidlandWingsFan74’s 2019 Draft Consensus Draft Rankings that was posted last year. I was actually working on something similar at the time but never got around to expanding upon it, so I’ve adapted it to 2020.

Here’s what I’ve done: I have taken the rankings from 14 different official services (some of which are behind a paywall, so I can’t show the rankings themselves). I’ve then used these numbers to find the average ranking for each player, the standard deviation of those rankings (how volatile they are) and the expected range they are expected to be drafted in (Average ±Standard Deviation).

Here are the rankings that I used for this list:

These numbers should tell us a lot about what public consensus is on how good these players are and where they are expected to go. There are some obvious disclaimers I need to make, however:

Here’s a list of every player that has an average ranking better than 100 (104 total players). I have eliminated players only ranked by one service. I also have a full version of the 332 players I have ranked on a google doc here.

There are a few areas to note here.

Alexis Lafreniere is the consensus #1 pick, all services have him ranked 1st. We’re going to consider Lafreniere as a guaranteed 1st overall selection going forward. There’s also a very clear cluster of players ranked above 7th overall on average. This will feature heavily in the next part and will thus be referred to as the top 8 cluster. This group is a testament to how strong the draft is in the top area of the draft.

That’s this part wrapped up then, if you have any questions about any of the rankings or players let me know, I’ll try to keep an eye on the comments. In the next part we’re going to go over each of the Red Wings options with their 1st pick, wherever it lands. We’ll look at who might be available, as well as some personal opinions.