‘95-’96 Red Wings: Which players made this team so dominant?

Share All sharing options for: ‘95-’96 Red Wings: Which players made this team so dominant?

Editor’s Note: Before you read this, you should read our previous article about the 95-96 Red Wings, and why they are likely the best NHL team to never win a Stanley Cup.

For those of us who remember, and it’s real hard for me since I was so young at the time, the 1995-1996 Red Wings were about as dominant as you could hope for in a team. Before being knocked out in the Conference Final at the hands of the Colorado Avalanche, the team won a staggering 62 regular season games. According to Hockey Reference, the average amount of wins for an NHL team that season was 36. It was all propelled by a group of grizzled vets, and a pack of young superstars who would begin building a dynasty. Today, we’re looking back at the key players who acted as the straw(s) that stirred the so-called drink.

A group of five Russians, playing a style of game the NHL had never seen before

Duh. Gotta lead off with this, right? You know their names, you know their legacy. A group of five Russians, playing a style of game the NHL had never seen before — the end product, was a dazzling display of video game-like skill and grit. It was in 1995 that, in my opinion, the NHL changed forever — and it was all thanks to a quintet of Russians donning the Winged Wheel.

We could do an entire series on The Russian Five. They’re getting a special shoutout in this article for obvious reasons.

We’ll touch on some of them as we go along, but I’m going to break the key players down by position: forward, defense, goalie. My goal here is to try and pick out some of the players you may have forgotten about. Not just the Steve Yzermans, or Sergei Fedorovs.. But the other guys.

The Red Wings acquired Johnson in a trade with Philadelphia in exchange for Jim Cummins and a 4th round pick in 1993. Johnson was just getting into the NHL at the time, and the club saw him as a potential center they could build around. Johnson didn’t hit full stride until the 95-96 season, where he rattled off 40 points in 60 games. The following year, Johnson was traded to Pittsburgh for Tomas Sandstrom.

Johnson died by suicide at his home in Michigan in 2009. I’ll always remember him as the guy who many Wings fans didn’t talk about, but they didn’t need to. He played a role as a spry 24-year-old forward who brought skill to a team flush with veterans.

Maybe you don’t think Doug Brown deserves to be mentioned.. Maybe I think you’re a dork. Who knows. What I do know is that hearing Bill Clement shout “DOUGIE BROWN!” will always make me smile.

Doug Brown was one of my favorites as a kid. He spent the final years of his NHL career with the Red Wings, won a couple of Cups.. No big deal. I’ll always remember him as the complimentary player who made memorable. He wasn’t a skill player, but he fed off other skill players’ energy.

He didn’t score the goal, but his quick outlet made all the difference in this play in particular.

The Professor was probably my most-favorite Red Wing to watch. An unadulterated playmaking wizard who I think could go down as one of the best playmakers in NHL history.

Primeau was a near-30-goal-scorer in the 95-96 campaign. He was a bruiser, never shied away from throwing hits or dropping mitts. I’m mainly mentioning him, because of the trade he was involved in after 95-96, which ultimately put the Red Wings over the top. You know, that Brendan Shanahan guy. Pretty good. 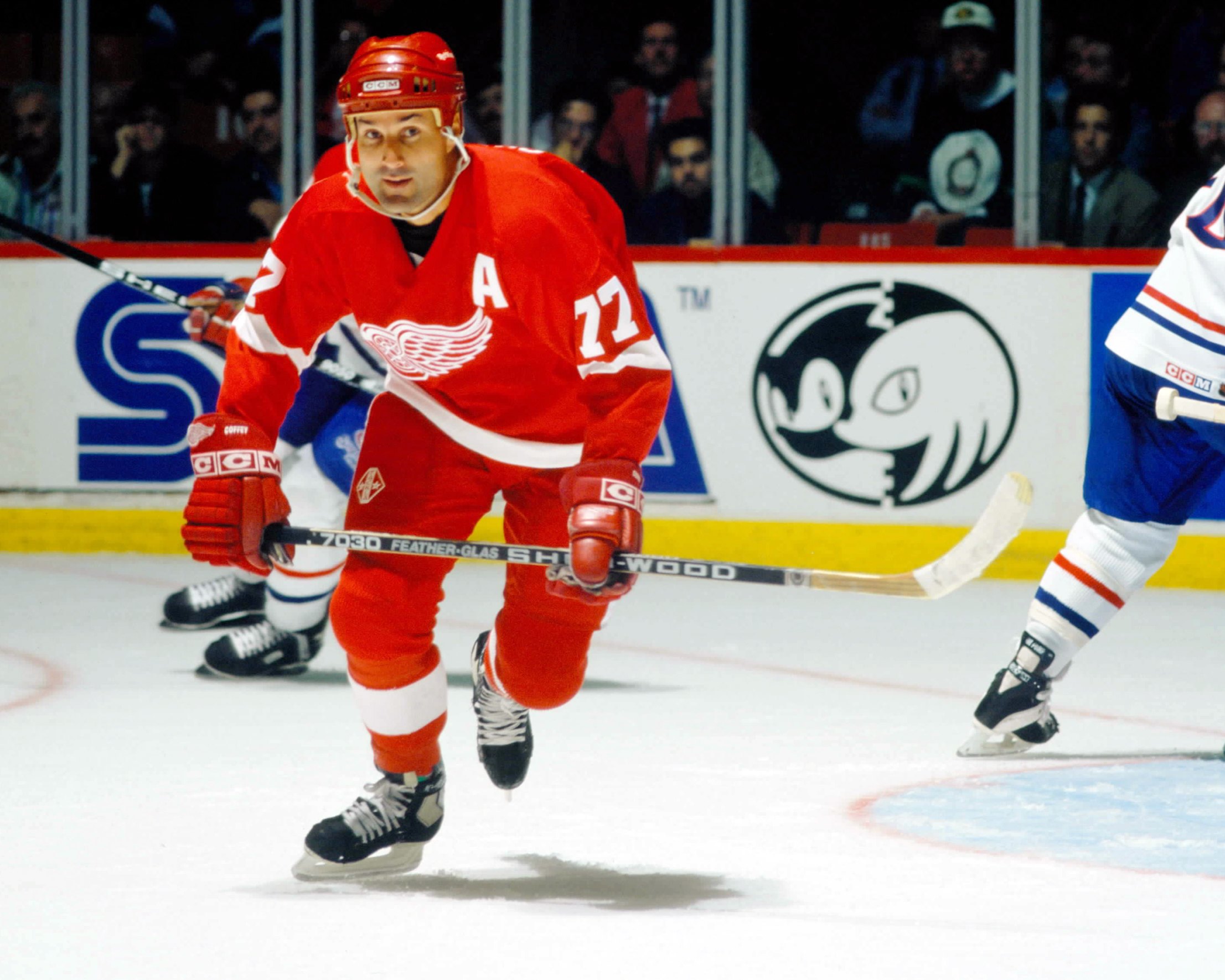 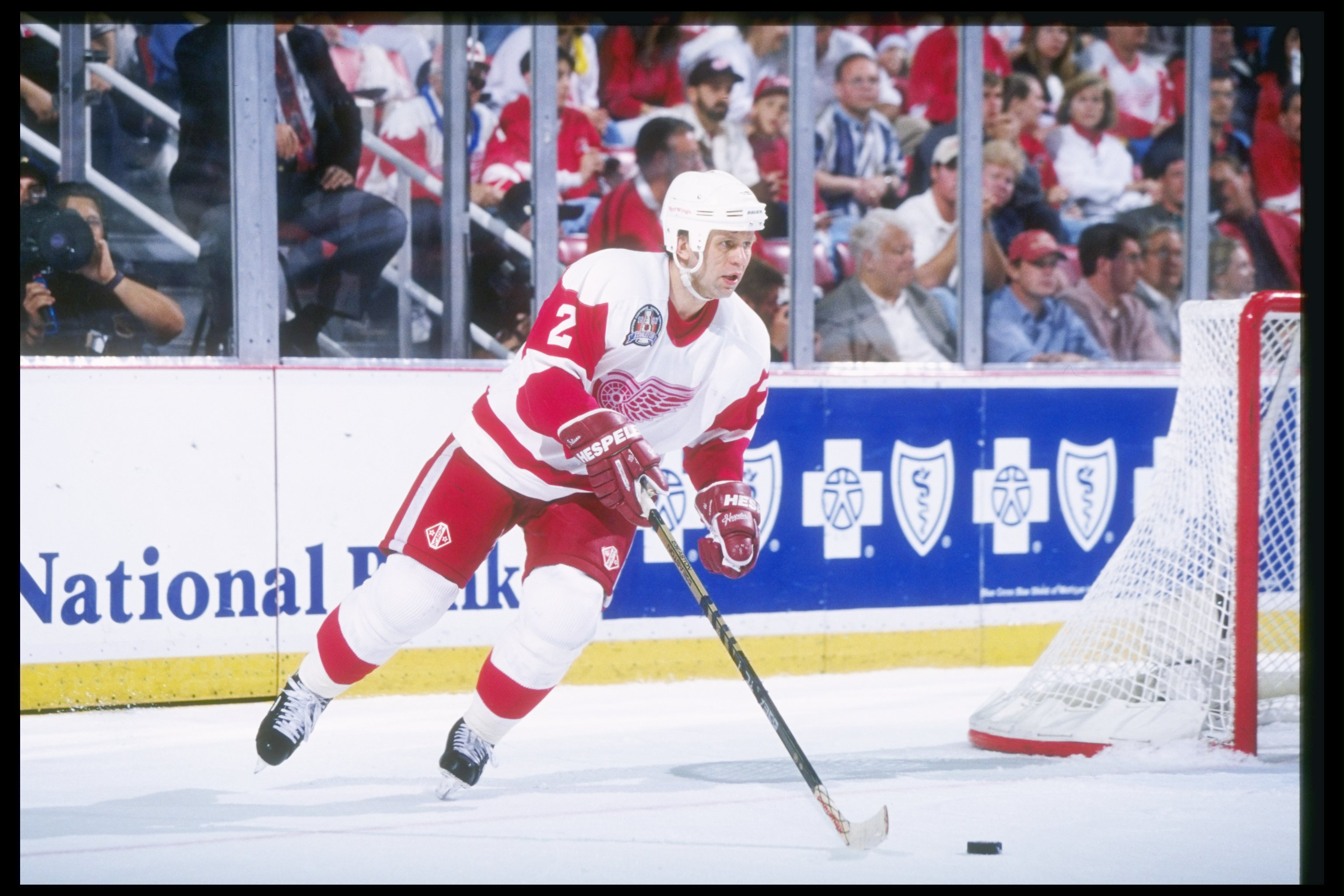 The 95-96 Red Wings defensive corps was absurd. Perhaps alone the driving force behind their success. Scotty Bowman’s defense led the league in goals against (181), led by THREE Norris Trophy-contending players. With that being said, those three players are my picks. Okay, so maybe they’re not players you forgot about, but what’s an article written by yours truly without bending the rules?

“I don’t need to score the goal. I need someone to start thinking about me and forgetting about scoring goals.” -Vladimir Konstantinov

Our beloved “Vladinator.” Perhaps one of the most criminally-underrated defenseman of all-time, in any league, on any planet, in any universe — this, of course, before his career tragically ended too soon.

Konstantinov was a model two-way defenseman

A one-man wrecking crew on skates, a defensive mastermind, and the type of player that if you were to take your eyes off of him, it was already too late. Konstantinov was a model two-way defenseman. The Russian rearguard put up 34 points (14-20—34), and setting aside feelings on the stat, had a league best plus/minus of +60. He finished 4th in Norris voting that year.

At the tender age of 34, Coffey played his last season in Detroit. He went out on a high note, putting up 74 points (14-60—74), including 14 points in the playoffs. Coffey spent most of his time with the Red Wings when they were finding their stride, but nevertheless, he will go down as one of the league’s all-time great offensive defensemen. He finished right behind Konstantinov in Norris contention. But, who could forget the horrific game one of the WCF when this happened?:

Disclaimer: I do not remember this moment at all. In fact, it may have never actually happened.

Ever heard of him?

Nick Lidstrom was 25 when the Red Wings began redeveloping into a dynasty. He put up the same amount of assists as Igor Larionov, and finished right behind Paul Coffey in the Norris race.

I don’t think I need to explain TPH to everyone. We know what he was — The best defenseman to ever play in the NHL. This will not be up for debate. Not here, at least. A dynasty all on his own. He makes this list because at the time, people were just beginning to find out how special of a talent he was.

I’m adding one more and you can’t stop me.

95-96 was the best season of Fetisov’s career, and it’s even crazier to think that he was 37 at the time. With 42 regular season points (7-35—42), I still think it’s absurd that he didn’t get any Norris votes. Regardless, Slava played a major part in the injection of Russia into North American hockey. Probably some of the softest hands you’ll ever see on such a stout defender. 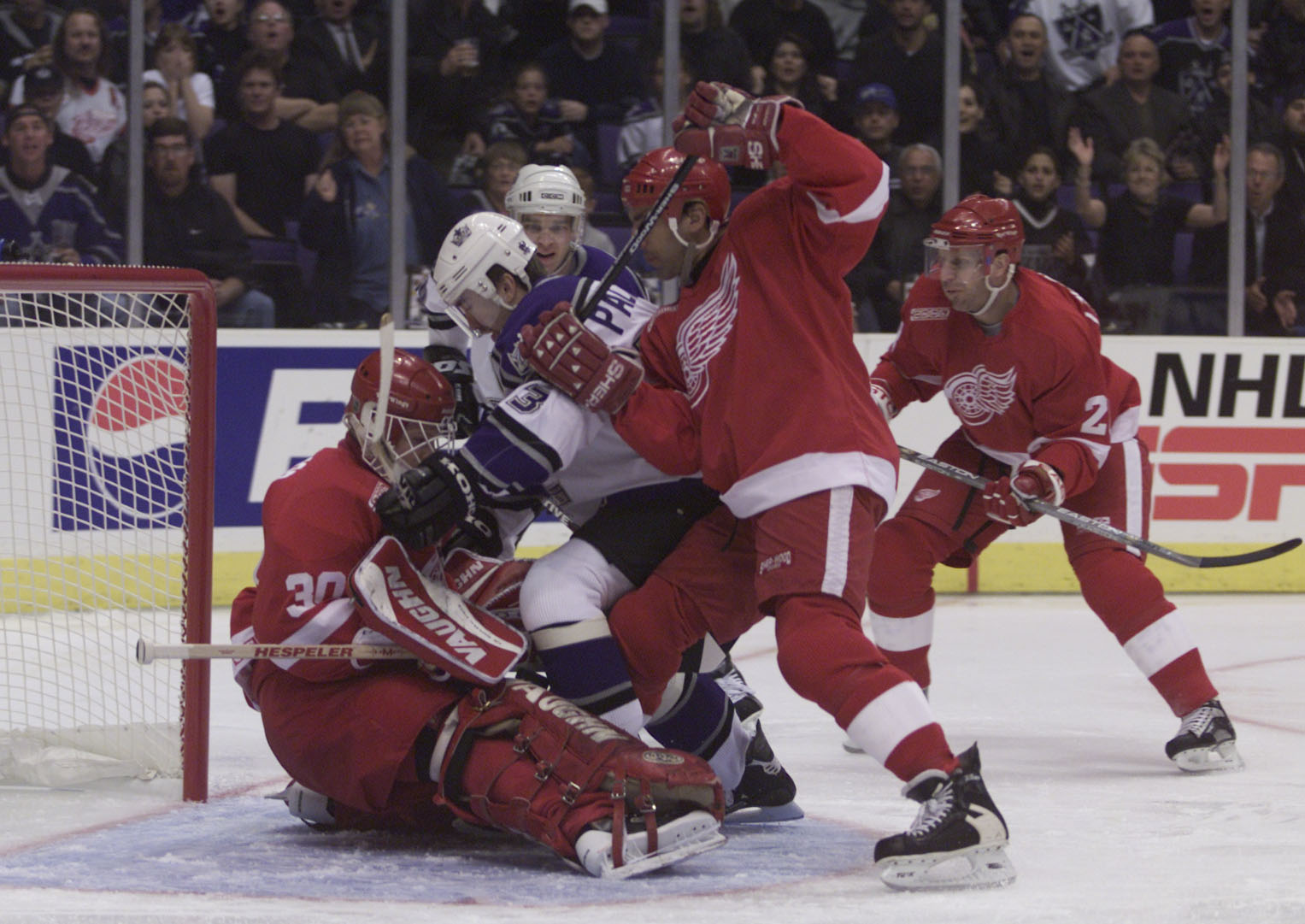 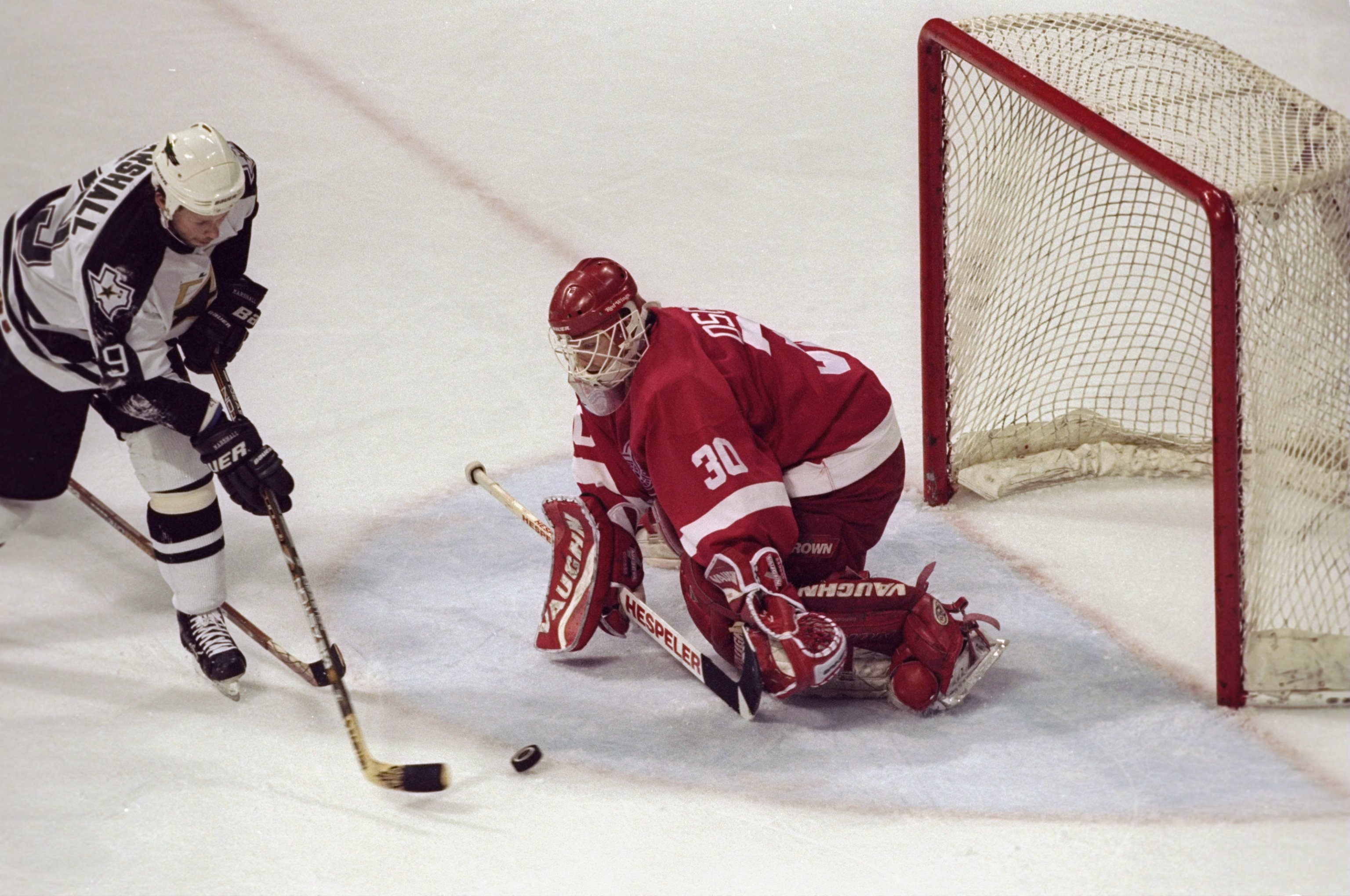 There can only be one when we talk about 95-96 greatness. A man who needs no real introduction. Ozzie was just 23 years old when the Red Wings pounded the 95-96 NHL Regular Season. It’s funny because, as Helmeroids (Sara) previously mentioned, Chris Osgood has been 30 years old since 1990.

Osgood stacked up a league-best 39 wins that season, and only registered six regulation losses. An absurd stat, which was no doubt fueled by the absurd team in front of him. Osgood split the William Jennings trophy with his counterpart Mike Vernon, and finished second in the Vezina race. Plus, who the hell could forget this gem?:

I’ll be honest, writing this was a challenge. Mostly because it was so long ago, but also because it’s hard to talk about this team without fully crediting Steve Yzerman, Sergei Fedorov, or Slava Kozlov. Reason I skipped that, is because we all know the roles they played — but it was the other blue collar players that acted as the oil in this fine-tuned machine. Scotty Bowman knew how to build a team, and he knew how to unearth talent from the nooks and crannies of the hockey world. It’s a shame this team never fulfilled its ultimate task, but there should be little doubt that it will go down as one of the NHL’s greatest teams of all-time.

Be well, be safe, and be healthy, friends.