The Red Wings Options for Their First Round Pick 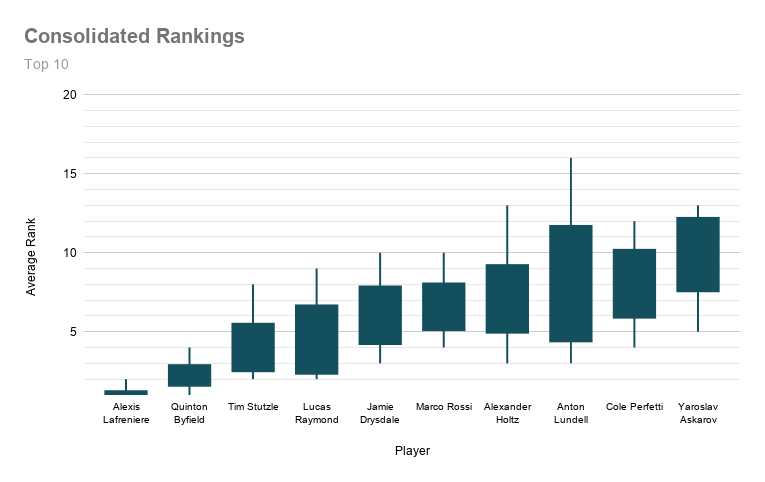 Welcome back to my consolidated draft rankings project. This is part 2 of 3, if you haven’t read pt.1 I suggest doing it here.

Firstly, I have expanded the rankings since the last post, it now includes 26 different rankings. Most of the new additions are at least 62 players long, so that should help increase reliability for all players the further back you go.

I have a public google sheets doc for this which I will keep updated. It includes all the sources, details, my expected value charts and a tool for individual players. If you don't want to read the rundown you can check out the sheet.

As a recap, last time we went over what exactly these rankings were as well as the rankings themselves. In this part we’re going to be going over the Red Wings options with their 1st round pick. This pick will be between 1-4 depending on the results of the lottery. Let’s move on.

This first pick is obviously the most important and is probably the most interesting in the draft for the Red Wings. Assuming that the NHL doesn’t do a shenanigan with the draft lottery the Red Wings will pick in one of any of the top 4 picks. There are 9 players who are ranked as high as 4th, this is the previously mentioned top 8 cluster, plus another that jumped into that area in the update.

The consensus is that if you aren't picking top 2, there are a group of about 7 highly ranked players that are all very close to each other. All of the players ranked in the top 9 cluster are highly skilled players with potentially elite ceilings, there are no red flags in that area for me or most people. This is a very strong top 9.

This post is not meant to be a scouting report, and I'm sure most of you already have a very good idea of what kind of player Lafreniere is. Regardless, just know that Alexis Lafreniere is an almost guaranteed #1 overall pick.

If the Wings get the 2nd overall pick they will have to pick from the best of the rest. Quinton Byfield is the highest ranked player available and I personally believe he’s the obvious option, but 20% of all services had him ranked further than 2nd, as far back as 4th.

There are two other players ranked as high as 2nd, Tim Stutzle and Lucas Raymond. You'll read more about them later, but Stutzle was ranked second 4 times out of 26, and Raymond once.

Historically, as well as in this draft, 3rd overall is where the draft really starts.

I’ve grouped these two picks together because in general the group of players we’re going to be talking about is exactly the same. My own personal evaluation also suggests that there isn’t a significant enough value difference between the 3rd and 4th overall pick to really worry about. It’s a 2 player draft and I don’t think winning the 3rd overall lottery is that much better than falling to 4th.

There are 8 players not named Alexis Lafreniere who had their peak at either 3 or 4, I’m going to be going over these players individually in order of their average ranking:

Like I said before, there is a chance that Byfield is available at #3. 20% of services had him after 2nd and my own odds place him available at 3rd ~12% of the time. The obvious caveat here is that it depends on what the 2nd overall team thinks, and we don't yet know what that team is.

Stutzle has jumped into the 'best of the rest' group after the strong top 2. Again, there's a possibility he goes earlier, which might come down to the fact that he was a big riser throughout the year. He’s locked himself in the 2-4 range for most of public consensus and seems like a pretty high % option for the Wings if they do pick 3rd or 4th. Only 27% of services had him ranked outside of the top 4.

Note: Stutzle has been a centre for most of his junior career, but he was put on the wing this season with Mannheim. I'd guess the team that drafts him will have their choice on whether they want to develop him as a winger or a centre.

Raymond was actually the commonly ranked #3 player for the first half of the year. These days, though, he’s actually only been passed by Stutzle in 46% of rankings. The main difference is that Stutzle rarely falls more than two spots after Raymond, while some rankings are less sold on Raymond, thus the average is lower. If you look at my consolidated value rather than rankings, the two are very close, to the point where it's almost a coinflip.

The only defenceman worth talking about in the top area of the draft. Drysdale's ranked in the top 9 in all but one ranking, where he was ranked 10th. I expect this is because he’s the sole defenceman, he won’t fall far out of scarcity. He's also ranked as high as 3rd, appearing there twice.

On the note of value from scarcity; One thing I’ve noticed that there seem to be a lot of defencemen ranked in the mid 1st round that I personally think are rated higher than they deserve to be (more than usual, at least). I wonder if a lack of high-end defencemen in the draft is causing an artificial increase in value for some of these defencemen. Just a thought.

The first player we’re talking about that is available at 4th in all services that I ranked. He also has a fairly small deviation in his rankings, which is a surprise given the type of player he is. He’s also only ranked outside of the top 9 once in 26 rankings, where he was ranked 10th.

Again, I don’t want any of these to turn into scouting reports, but I do want to mention that I am all in for taking Rossi if Lafreniere and Byfield aren’t available. I have him as a strong 3rd and very little that I’ve seen in my own viewings to justify putting him any lower. If there’s any player in this top range that’s underrated it’s Marco Rossi.

While this top 9 cluster is fairly tight in how the consensus ranks these players, Alexander Holtz actually has a relatively high deviation. He’s ranked as high as 3rd by one service, and as far back as 13th by another. His average though sits right around the latter half of the top 10. If there’s any player in this group that I’d predict could be a faller on draft day it’s Holtz.

His ranking volatility does make sense, though. He’s a very highly skilled offensive player with an underdeveloped transition and defensive game. He’s also getting limited minutes on a pro team.

Lundell has the most volatile rankings out of any player in the top 10. He's ranked as high as 3rd by one ranking and as far back as 16th by another. The wild rankings differences usually come down to a question of upside, as he's a very developed player playing good minutes in a pro league.

Note: Lundell is listed as a centre, but has mixed between centre and winger for this current season. Similarly to Stutzle, the team that drafts him will likely have their choice on how to develop him. Also, Lundell is the most notable difference between my previous rankings of 14 services and the current one, so he actually jumps up significantly in these rankings.

Perfetti has the same average ranking as Lundell, but Perfetti's average value is actually lower. He's a less controversially ranked player than Lundell and Holtz, but nobody has liked him enough to put him in the top 3.

This is a list of players who aren’t ranked in the top area, but I thought were worth mentioning in this segment.

The highest rated goaltender in at least a decade, potentially since Carey Price in 2005 (it’s hard to tell just how highly rated Jack Campbell and Jonathan Bernier were in 2010 and 2006. Askarov is the next highest ranked player after the top 9 and has been ranked as high as 5th (in 3 rankings). When talking about the top area of the draft you can’t ignore Askarov.

The main question is the one that usually follows goalies. Just how worth the risk is a top goaltender? Goaltenders taken high are historically less likely to succeed than skaters, but a great season from a goaltender can have a bigger impact than any one skater. Askarov is an unprecedented prospect in the modern era in multiple ways.

Gunler gets the honour of being the most controversial player of the draft. One standard deviation from average places his likely draft range from 7th to 26th. This is with 25 out of 26 rankings listing him.

Playing limited minutes in the SHL doesn't help, as well as his status as a high ceiling but inconsistent skilled winger. If a team really likes him he could go very high, and is a prime candidate for a reach.

That’s part 2 wrapped up. Again, if you have any questions about any of the players here (or not here) let me know. In the next part we’re going to go over the potential options for the Red Wings own 2nd round pick, as well as their picks from 51-65.