Back in 2013, Henrik Zetterberg put the Red Wings on his deteriorating back, and we won our last four games to squeeze into the playoffs in a lockout shortened season. We were banged up, with a large portion of our regular roster in the body-and-fender shop, and we ended up playing over a half dozen rookies in the playoffs. It is entirely possible that, had the season been a full 82 games, we wouldn't have been anywhere near a playoff berth.

After overperforming in the first round and eliminating the Ducks, the weaknesses of our team were put on display for all to see when we blew a 3-1 series lead and lost to the eventual Stanley Cup Champion Blackhawks. Many were calling for us to rebuild then. I remember being unsure (read: scared) about a rebuild, but it was evident that our forwards' dwindling production couldn't compensate for our ever-increasing defensive lapses, and bad times lay ahead if we continued on the road we were traveling.

We all know how that went, but for a fleeting moment in the 2013 offseason, it looked like we might be heading in the right direction when we traded down two spots in the first round and gained a second round pick. Those draft picks turned out to be Anthony Mantha and Tyler Bertuzzi, two prospects sparkling with potential, while the pick we gave up became Mirco Mueller. If you said, "who?", you aren't alone.

Mueller played just over 50 unremarkable games for the Sharks, while Mantha and Bertuzzi played on the top line with our captain. This was a massively lopsided trade in retrospect, but there are even more lessons to learn from examining the trade tree. 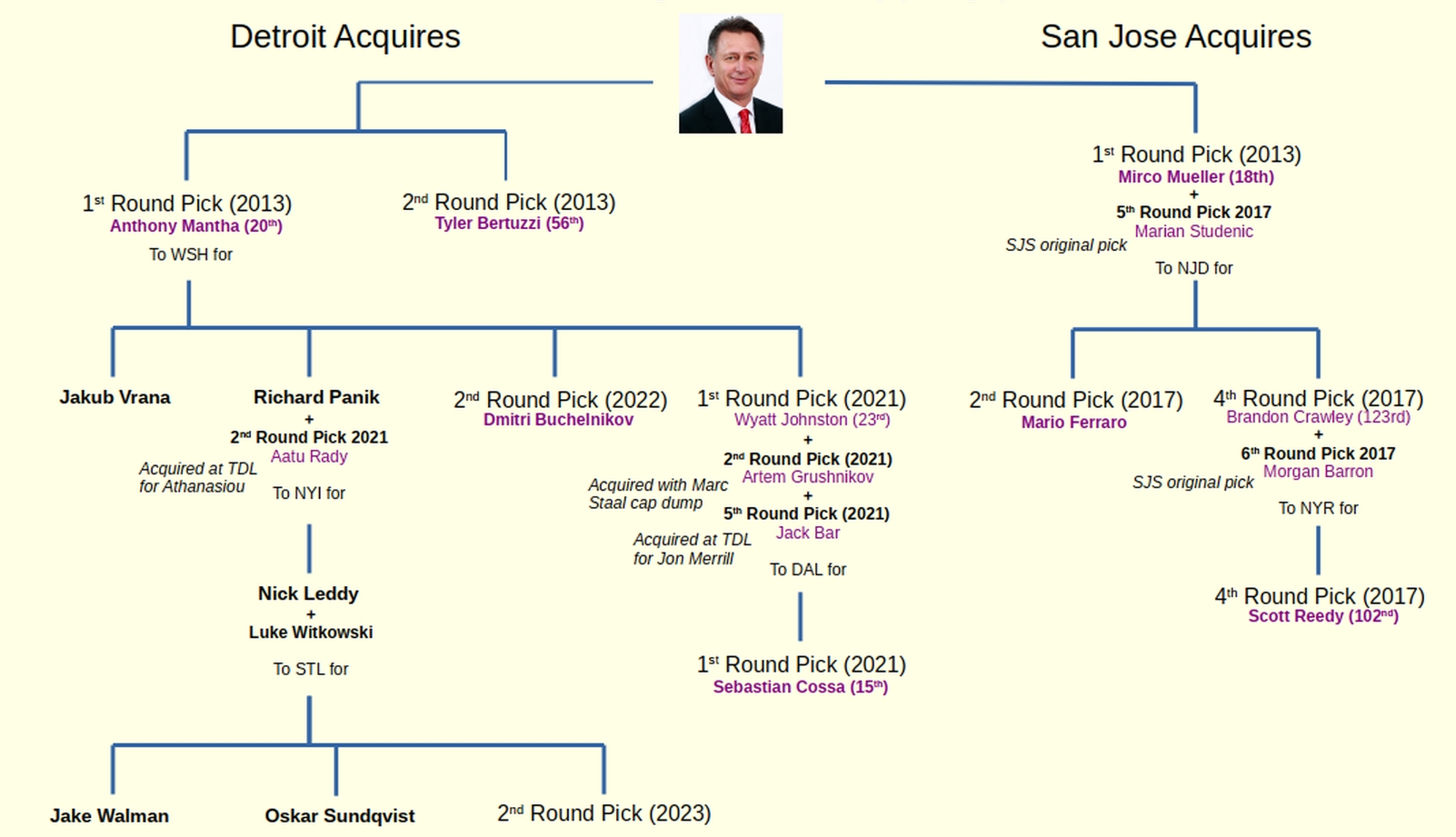 (PC Pro Tip: right click on this image and open the image in a new tab if you need a larger resolution version. Mac users, you are on your own)

All of the subsequent moves after the Mantha trade include 2021 picks that we acquired through trade. Of the potential picks that could have been used, Yzerman kept all of the Detroit picks in the same round, and traded the other (lower) picks to get these deals done. When you are picking sixth in these rounds, that is tidy asset management.

Furthermore, the two additional picks packaged with Washington's 1st to get Sebastian Cossa also came at minimal cost to the team. The 2nd round pick we received to take Marc Staal's cap dump. In other words, we were paid a 2nd to suffer through two seasons of pretty solid veteran defense from Staal, which is hardly a cost. The 5th we got from flipping a defenseman we weren't going to resign (Merrill) at the deadline of a lost season. Another fairly low cost

I included the Leddy trade, despite Richard Panik not being the principal reason the trade happened. After taking on Panik as a cap dump, Yzerman packaged a 2nd from the Andreas Athanasiou trade (thanks again, Kenny) with him to get a year out of Leddy. Ultimately, the cost for a year of Nick Leddy was only Richard Panik, as we just swapped a 2021 2nd rounder for another 2nd round pick in 2023 when we flipped Leddy at the trade deadline. As such, the haul we received for Leddy ends up being a part of this tree after all.

In order to dig themselves up out of the Mueller debacle, San Jose was forced to part with two additional picks of their own, rather than surplus picks they acquired through trade, as Yzerman has in this tree. To be fair, they were one season removed from a Cup Final appearance. The only original pick of theirs that they used in 2017 was their 1st round pick, having burned the rest in trades, but the difference in asset management is stark.

They seem to have now gotten some value out of the deals, with Mario Ferraro starting his new 4 x $3.25M contract extension, and Scott Reedy getting some games while still on his ELC. However, those two players ended up costing a net of six draft picks - the two they traded to us in 2013, the additional two they added to make subsequent deals, and the two picks used to select the players themselves. Very pricey, and from 2013, they had to wait almost seven years for any of these current assets to contribute on the ice.

As I alluded in the title, swapping picks can be perilous territory.

There's no question that the Mantha/Bertuzzi production for the Wings dwarfs Mueller's contribution to the Sharks. Name recognition alone would tell you that. But what it even worse is simply looking at man games played. Detroit's total from everyone in this trade tree excluding Mantha and Bertuzzi equals the total man-games played on the San Jose side of the tree. 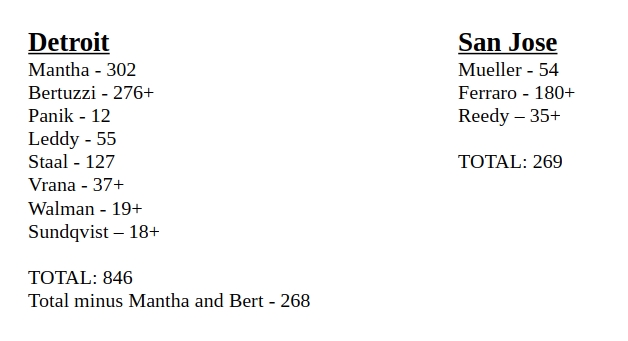 With four current players on the Wings adding to their total vs the Sharks' two, this number isn't likely going to improve for San Jose. When you consider Cossa, Buchelnikov, and the remaining pick, plus a potential Bertuzzi blockbuster on the horizon, this man game comparison could likely be beyond ugly in five years.

Yzerman has the sharpest eye for trading horseflesh I have ever seen in a GM. His 'hockey trades' for underperforming players and waiver wire pickups have yielded excellent dividends. The man can see value where others see just a player.

While Leddy's production was subpar, it was a full pre-deadline season played without serious injury, which isn't always easy to come by with a veteran. Despite Nick Leddy being fairly un-Leddy-like while on our team, he demanded a nice haul at the deadline, again reinforcing Yzerman's eye for value.

The chance he took on Staal ended up paying strong dividends and impacted us drafting a goalie. If Vrana can stay healthy, his production this year could be a real difference maker. Sundqvist played with some serious tenacity at the end of last season, and could be another strong contribution to our bottom-six, even if his production might not exactly match his cap hit.

All of this is to say that while Stevie Y has made some swift trades in the last two years, it was Ken Holland's move in 2013 that started the boulder rolling down the hill, enabling Yzerman to crush it with many of these trades.

This trade in 2013 is has led to four Wings on the current roster (Vrana, Walman (IR), Sundqvist, Bertuzzi), one former player with substantive contributions (Mantha), another former player with middling contributions who still retained strong trade value (Leddy), a new high risk/reward prospect (Buchelnikov), a potential goalie of the future (Cossa), and a pick yet to be used. I'm confident there will be even more to this tree in five years, so I'm definitely saving this file for further additions.

But if you are ever thinking of bashing KH, remember this trade and the fact that Holland bravely waded into these perilous waters to make it happen. All you need to do is look at the other side of the tree to see how easily a move like this can go sideways. Remember all of the riches we have been able to squeeze today out of his move in 2013, and maybe you won't be quite so hard on him.

Also, apologies to Steve Dangle and the SportsNet team for my amateur appropriation of your excellent video series.